November 8th,2013; Credit: Save the manatees.org


2013 has become the deadliest year ever for Florida's endangered manatees. In total, 772 manatees have died so far this year from January 1st through November 8th, making it the largest annual manatee die-off in Florida since record-keeping began.

The previous record was set in 2010 when biologists with the Florida Fish and Wildlife Conservation Commission documented 766 dead manatees, of which hundreds died from cold stress. With more than two months still to go in 2013, nearly twice the number of manatees have already died than died in all of 2012.

October 2013; Credit "Save the manatees" What is the Status of the Manatee Population?
As of the most recent aerial survey flown in January 2011, there are an estimated 4,834 manatees in Florida.

These aerial surveys are flown over manatee aggregation sites during the winter months when manatees gather in high numbers. Since the surveys started in 1991, the number of manatees counted during the surveys has increased, which is related both to a growing population and improved survey techniques and improved knowledge of where manatees aggregate.

Synoptic survey counts do not provide statistical estimates of population size and thus are not supposed to be used to determine trends in the population. Rather, these surveys provide a minimum count of manatees. The outcome of the survey is highly dependent on weather conditions and factors including wind speed, glare, and water clarity (turbidity) affect the ability of researchers to count manatees, while the severity of the cold front determines just how many manatees are present at the warm water site to be counted.

Currently, the U.S. Fish and Wildlife Service is reviewing updated population and mortality figures, as well as other relevant data regarding threats to manatee habitat, as part of their status review to determine whether manatees should remain listed as an endangered species. (2)

Get the latest Synoptic Survey Results at the FWC Fish and Wildlife Research Institute website.

The manatees return to Florida from as far away as Boston Harbor to avoid cold water.

Manatees were spotted in the Florida Greenland Waterway in mid August. They on the way back to Florida for the Winter!

Temperatures below 62 degrees are harmful to them so they seek the warmth of the Florida "Springs" which remain 72 degrees -year round.

Blue Springs is one of the largest gatherings and has had over 200 manatees at one time. 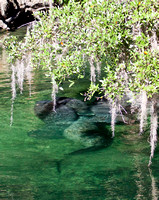 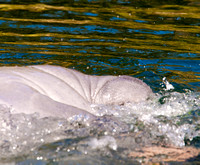 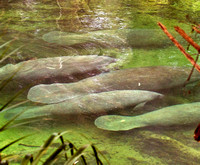