Home»I know it's Hard to believe but.... 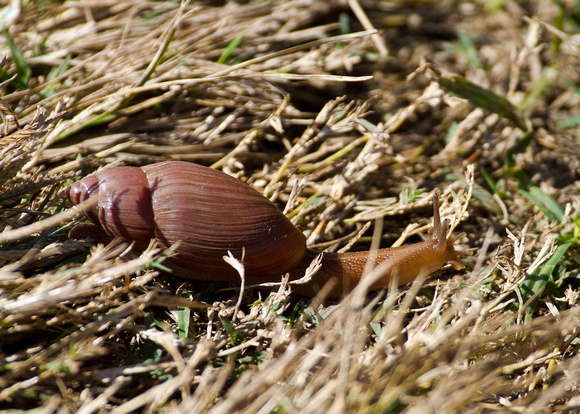 I think I lucked out on the ID of this guy! I happened upon a photo of the Wolf Snail at U of F.

Predatory snails such as the rosy wolf snail, Euglandina rosea (Férussac, 1821), will attack slugs, and may account, in part, for the relatively low slug densities in Florida.

Euglandina rosea prefers snails to slugs, but will attack and consume small slugs in the absence of snail prey. Euglandina rosea is native to the southeastern USA, and is quite common in woodlands and gardens in Florida.

It has been relocated to other parts of the world, including Hawaii, India and many islands in the Pacific region, in an attempt to control invasive snails such as giant African land snail, Achatina fulica (Férussac, 1821).

It has been used to provide partial control of giant African snail, but it has been quite disruptive to native snail populations, so its use is discouraged outside its natural range (Barker 2004).

Euglandina rosea, a common predator of snails and slugs in Florida.

Here's a link to the entire article;

Here's the rest of the story of snails