I added a sophisticated trail camera with day and night still photo and video capability for scouting wildlife areas .

The hummingbird feeder succumbed, to a major failure, and the camera went on-duty in the backyard to catch the culprit.

Barney da Bear was caught in the act of pilfering the avian offerings. The folder now contains a glimpse of what most folks don't know about their Florida Backyard.

Living "near" the forest in North Central Florida can widen your circle of friends and not so friends. The nightly bear visits were a pleasant surprise -- at first! But soon became a topic to planning ... how to ward off our visitors!

The "Trail Camera" captures the unseen. You thought the birds "sure eat a lot of bird food." What a surprise!!!

It's cute to watch "Barney" the bear sit up on his/her hunches and lick the bird food from the feeder. How about the trash can contents ( feminine product wrappers on all of the neighbor's lawns) spread over 150 yards down the road of the highway??? Not so fun!

I took to carrying a large spotlight with me when I walked the dog at night. The bear was normally behind the house so I poked out the garage door and lite up the night in the rear of the house........ The German Shepherd took off towards the trash cans in front of the house and "engaged" the bear!!

Fortunately, The bear butt was facing the dog and the bear's attention was in the can! The bear ran and I started breathing again!!

I've arranged the video clips in date taken order, with the newest one at the top so you can see the evolution of the bear's behavior. Too comfortable - too soon - with people!

What's in your backyard? 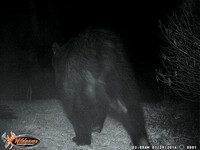 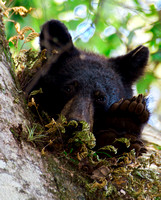